Background: Volume contraction frequently contributes to the development of acute kidney injury.  The rapid assessment of volume status in patients with acute kidney injury could improve decision making and outcomes.
Methods: The maximum and minimum diameters and percent collapsibility of the inferior vena cava (IVC) were measured in 30 patients admitted to the medical intensive care unit with laboratory evidence of acute kidney injury.  These measurements were made on the day of admission and 24 hours following admission.  Information about age, gender, body mass index, serum creatinine levels, and fluid balances was recorded.
Results: This study included 30 patients with a mean age is 62.4 ±16.0 years.  The mean initial creatinine was 4.3 ± 4.2 mg/dL (range: 1.7 mg/dL to 22.1 mg/dL).  The mean fractional excretion of sodium was 2.06 ± 2.65%.  The mean maximum diameter of inferior vena cava was 1.8 ± 0.5 cm with the range is 0.4-2.65 cm.  The mean percent collapse was 32 ± 20%.  Five patients had evidence of hypovolemia using guidelines from the American Society of Echocardiology; 6 patients had evidence of hypervolemia.  Nineteen patients had measurements between these 2 categories.  There is no significant change in mean diameters following fluid administration for 24 hours.  An initial IVC diameter of 0.94 cm predicted ≥ 30% collapsibility with an area under the curve is 0.748.
Discussion: Patients with acute kidney injury based on laboratory measurements had evidence for hypovolemia, euvolemia, and hypervolemia based on IVC measurements.  There was no consistent change in IVC dimensions following fluid administration, even though the creatinine fell in most patients.  Simple bedside measurements of IVC dimensions can facilitate fluid administration decisions but must be used with clinical assessment.

Acute kidney injury is relatively common in hospitalized patients and clearly increases mortality, the length of stay, and cost. Chertow reported that the adjusted odds ratio for mortality was 6.5 in patients who had an increase in serum creatinine ≥0.5 mg/dL during hospitalization.1  The mean adjusted increase in hospital cost was $7500 (1998 US dollars).  Multiple factors can contribute to the development of acute kidney injury, and clinicians usually focus on volume status, comorbid diseases which the can cause kidney injury, and medications. The assessment of volume status typically involves the use of clinical information, laboratory tests, and possibly venous pressure measurements using central venous catheters.   Almost all patients initially receive empiric trials of intravenous fluids. Quantitative measures of volume status could improve this decision making and potentially avoid the adverse consequences of volume overload.  The measurement of inferior vena cava (IVC) dimensions and collapsibility has been used in evaluation of patients with trauma, sepsis, and heart failure; these measurements are  made easily at the bedside and do not have the risk of invasive procedures.2-4  We measured inferior vena cava diameters and collapsibility in patients admitted to our medical intensive care unit with laboratory evidence of presumed acute kidney injury.  The goal was to determine IVC dimensions in this group of patients and the association between changes in these dimensions and creatinine following fluid administration.

This study prospectively enrolled patients with a presumptive diagnosis of acute kidney injury who were admitted to the medical intensive care unit at University Medical Center in Lubbock, Texas. Patients were screened at 8 AM each day to identify patients with clinical presentations and abnormal laboratory tests consistent with acute kidney injury.  A creatinine level greater ≥ 1.5 mg/dL was considered abnormal enough for inclusion in this study. Current laboratory results were compared with prehospitalization results if available in our electronic medical record.  Demographic and clinical information was collected from the medical record on each patient.  Inferior vena cava dimensions were obtained at study entry and 24 hours later.  In addition, fluid balances and serial creatinine levels were recorded.

The investigators were not involved in the management of these patients, and the information collected on inferior vena cava dimensions was not provided to the physicians caring for the patients.  All patients gave written and informed consent for participation.  This study was approved by the Institutional Review Board at Texas Tech University Health Sciences Center in Lubbock, TX. This study was registered at the clinicaltrials.gov website (NCT 02165072).

This study enrolled 30 patients with a mean age of 62.4 ± 16.0 years; 70% of the patients were men. The mean body mass index was 30.4 ± 7.0 kg/m2.  The patients had the following comorbidities: diabetes–15, hypertension–13, coronary artery disease–5, atrial fibrillation–5, CHF–3, chronic kidney disease–3, acute GI bleed–1, and cirrhosis–0.  Eleven patients (36.7%) had a prehospitalization creatinine level in our electronic medical records.  The mean initial creatinine was 4.3 ± 4.2 mg/dL; the range was 1.7 mg/dL to 22.1 mg/dL. The mean initial fluid balance prior to study entry was 3004 ± 1590 mL (Table 1).The mean fractional excretion of sodium was 2.06 ± 2.65 % (25 patients).  Six patients had central venous pressure measurements; the lowest reading in individual patients ranged from 1-13 cm of water, and the highest reading ranged from 8-21 cm of water.  Sixteen patients had echocardiograms during this hospitalization.  The left ventricular ejection fraction was below 40% in one patient, and the right ventricular systolic pressure was greater than 30 mmHg in six patients.  Twenty-one patients had ultrasound of the kidneys at presentation.  Seven patients had large kidneys defined by a long axis dimension greater than 12 cm, one patient had hydronephrosis, and three patients had abnormal kidneys based on echogenicity. 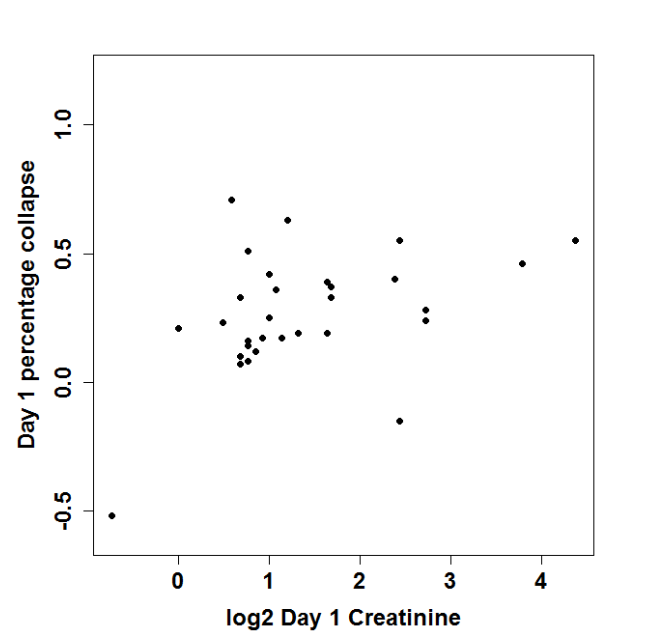 Most patients in this study had a maximum IVC diameter in the normal range.  The average percent collapsibility was slightly greater than 30%.  Based on the guidelines for echocardiographic interpretation of the right heart and the Brennan study, most patients fell in the middle group; they were neither definitely hypovolemic nor hypervolemic.5,6  The patient underwent significant volume expansion during first day of this study, but there was little or no change in the mean maximum and minimum diameters on average.  In addition, there was no correlation between the change in creatinine levels and IVC dimensions or the fractional excretion of sodium and IVC dimensions.

There is limited published information on the use of IVC dimensions and collapsibility in hospitalized patients with presumed acute kidney injury.  There is more information on IVC measurements in patients undergoing chronic dialysis chronic hemodialysis.  Cheriex studied 18 hemodialysis patients and correlated IVC dimensions with right atrial pressure measurements.10  Total blood volume in these patients correlated well with IVC dimensions but not with IVC collapsibility.  However, there was a poor correlation between dry weight based on clinical assessment and IVC dimensions.  Brennan et al used ultrasound measurements to assess intravascular volume status in patients at two hemodialysis clinics. 11 They found a relatively poor correlation between the patients’ weight (at or above dry weight) and IVC dimensions.  Thirty-nine percent of the patients were hypovolemic by IVC measurements on arrival to dialysis.  In addition, 10% of the patients who completed dialysis at or below goal weight were still hypervolemic by ultrasound measurements.  There was a correlation between hypovolemia measured by IVC and intra-dialysis adverse events, such as hypotension, chest pain, and cramping.  The poor correlation between the volume status based on IVC measurements and volume status based on dialysis goals probably reflects the complex comorbidity in these patients, differences in distribution of fluid between vascular spaces, interstitial spaces, and intracellular spaces, and the effect of uremia on vascular function and/or compliance.  The fluid volume in vessels is approximately 5% of the total body fluid volume.  Consequently, fluid administration, as in our patients, largely restores the intracellular volume and interstitial volume, and small changes in the vascular volume might not be easily identified with this technology.  These measurements likely inform clinical decisions when the patient is definitely either hypovolemic or hypervolemic.  The majority of our patients were in between these two states by IVC classification criteria, and management requires clinical judgment and empiric fluid challenges.  In these particular patients end-organ function, including urine output and changes in creatinine, provides important information about the benefits of volume expansion. Sobczyk studied IVC measurements during the first 6 hours in patients who had just completed cardiac surgery.12  They found a weak correlation between central venous pressures and IVC derived parameters.  In addition, they found no statistically significant differences between patients who were fluid responders and patients were nonresponders in IVC measurements or IVC derived indices.  Patients undergoing cardiac surgery often have complex comorbidity and develop a complicated pathophysiologic state during and following surgery on cardiopulmonary bypass.13  This clinical situation likely limits the potential correlations between simple anatomic measurements and underlying physiologic state and responses to therapy.  Some patients with acute renal failure in our study had chronic comorbidities which influence volume status and vascular responsiveness and acute physiological changes which might limit correlations between IVC measurements and volume status.  Information from central venous pressures measurements, renal ultrasound studies, and cardiac echocardiography was not consistently available in our patients.  However, the available results did not demonstrate any consistent results or uniform patterns in these patients and did not suggest any management strategies that might differ from clinical assessment.

This study had several limitations.  The patient population was heterogeneous with multiple comorbidities and a wide range in creatinine levels.  Most patients had an improvement in their creatinine following fluid administration.  However, the baseline creatinine measurements were not available in most patients, and long-term follow-up was not available.  Some patients likely had chronic kidney disease, and the absolute and percent changes in creatinine based on acute deterioration in kidney function were not ascertainable. However, these patients are the typical patients admitted to ICUs with abnormal kidney function, and clinicians need to make decisions based on information available at presentation.

In summary, we think that simple IVC measurements can facilitate clinical decision making in patients who present with presumed acute kidney injury. We suggest that patients with small IVCs and increased collapse and patients with normal IVCs should benefit from volume expansion.  Patients with increased IVC diameters and decreased collapse may be volume overloaded and need reassessment of their clinical status and more cautious fluid challenge trials.  Proving these assumptions would require relatively complex clinical trials with objective measurement of volume status and response(s) to fluid administration.