In this issue of the Southwest Respiratory and Critical Care Chronicles, Argueta and coworkers report a patient who underwent two surgical procedures to resect a recurrent left atrial myxoma. After the second procedure, she developed cardiac arrhythmias and AV conduction blocks and eventually required a dual-chamber pacemaker. The pathways relevant to this outcome are illustrated in the Figure below.1 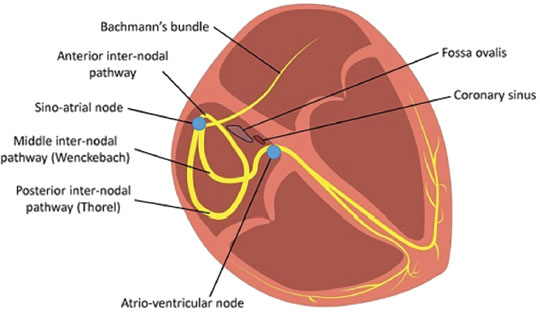 Conduction delays in this tract cause an interatrial block and prolonged P-waves (>110 msec). These P waves are often notched signifying delayed depolarization of the left atrium and in case of any block in this bundle, electrical forces then move from the right atrium to the atrioventricular node and then via fibers in the coronary sinus move into the left atrium causing depolarization in the left atrium to start inferiorly and progress superiorly. This causes biphasic P waves as the two atria depolarize in opposite directions. Delays in Bachmann’s bundle can cause supraventricular arrhythmias, such as atrial tachycardia and/or fibrillation arising from the left atrium, and asynchronous contraction of the right and left atrium. These arrhythmias and delays ultimately lead to left atrial remodeling manifesting as left atrial enlargement.

Surgical procedures involving the interatrial septum can injure these pathways and therefore lead to loss of interatrial synchrony. In particular, surgical resection of left atrial myxomas in an atypical location, such as near the sinus node, can injure the sinus node and the Bachmann’s bundle.3 This results in abnormal impulses arising from nonsinus node locations in the right and left atrium leading to arrhythmias, like atrial tachycardia and atrial flutter/fibrillation. Consequently, surgeons must pay close attention to the location and anatomy of cardiac tumors to avoid damage to these normal electrical conduction pathways. It is therefore advised to obtain pre and post-operative ECGs to detect conduction delays and monitor for arrhythmias during the immediate postoperative period so that early diagnosis can be made and appropriate steps taken during the postoperative recovery period.

From: The Department of Internal Medicine at Texas Tech University Health Sciences Center in Lubbock, Texas
Submitted: 7/4/2018
Conflicts of interest: none
This work is licensed under a Creative Commons Attribution-ShareAlike 4.0 International License