A 54-year-old African American veteran with history of type-2 diabetes mellitus, hypertension, hyperlipidemia, and gastro-esophageal reflux disease presented to the emergency department (ED) with a 1-day history of right inguinal pain and right lower quadrant abdominal pain. The patient complained of shooting pain radiating down to his right testicle which was worsened with coughing and a white penile discharge. He denied any injury, heavy lifting, fever, chills, nausea, vomiting, and diarrhea. He rarely goes outdoors and denied recent travel. He also denied recent tick bites and exposure to house pets and dead animals. His last sexual activity was months ago. He had a history of gonorrhea many years earlier, but no other sexually transmitted infections (STIs). His home mediations included metformin 1000 mg twice a day and aspirin 81 mg daily.

During his first ED visit, his vital signs were within normal limits. Physical examination was significant for a 7 × 4 cm firm, exquisitely tender right inguinal mass, which was not warm to palpation. No testicular tenderness, urethral discharge, or erythema was noted. Laboratory values were significant for leukocytosis of 12,000 cells/µl with neutrophilic predominance. Computed tomography (CT) of the abdomen and pelvis revealed an enlarged inguinal node measuring up to 2.3 cm in diameter with phlegmonous changes (Figure 1A). No surgical drainage was performed. He was discharged on a 15-day course of oral doxycycline which he completed. 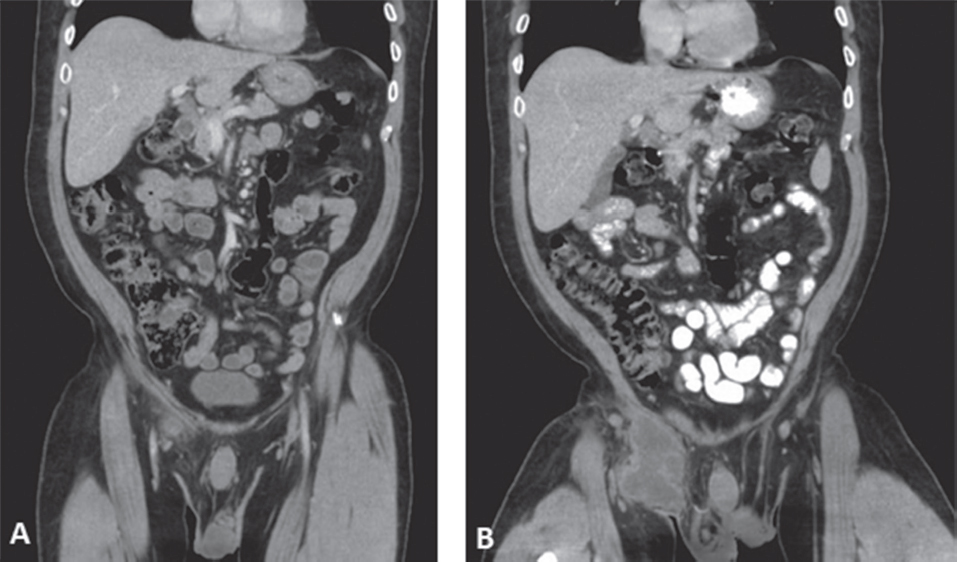 Figure 1. A) A CT scan of the abdomen/pelvis on the initial ED visit showing an enlarged partially hypodense right inguinal lymph node, measuring up to 2.3 cm, with reactive inflammatory changes in the adjacent soft tissue. B) A CT scan of abdomen/pelvis on second ED visit 6 weeks later showing the right inguinal lymph node previously identified has had significant enlargement, now measuring 6.4 × 4.1 × 9.1 cm.

Three weeks after his initial presentation, he returned to the ED with 2-days of right inguinal pain and increased swelling that woke him up from sleep. He denied fever, chills, dysuria, suprapubic tenderness, and flank pain. A repeat CT of abdomen/pelvis revealed interval enlargement of the right inguinal node measuring 6.4 × 4.1 × 9.1 cm (Figure 1B). He was started on intravenous vancomycin and piperacillin/tazobactam empirically. Bedside incision and drainage were performed on the enlarged inguinal mass. Approximately 150 ml of purulent fluid was drained and sent for culture. Several loculations were broken up using hemostats. He started to improve clinically with daily wound care. Preliminary culture results were positive for Salmonella species. He declined HIV testing. He was discharged on a 10-day course of oral ciprofloxacin.

Culture of the purulent drainage result became available 3 weeks later, revealing 1+ Salmonella enterica serotype Typhimurium I4, 12 i1,2. Antimicrobial sensitivity to ciprofloxacin had a minimum inhibitory concentration of 0.032. Trimethoprim-sulfamethoxazole (TMP-SMZ) tested sensitive by disc diffusion. The patient was subsequently lost to follow up.

Non-typhoidal Salmonella lymphadenitis may develop as a local infection, even with treatment of bacteremia. The incidence of non-typhoid salmonellosis is estimated at over 2 million cases annually, but extraintestinal manifestations account for less than 1% of these cases.3 Focal salmonellosis is thought to be secondary to a brief episode of bacteremia after infection from the gastrointestinal tract. Salmonella species can live for unknown periods of time within macrophages, resulting in a continuous carrier state.2 However, the chronic carrier state is only well reported in the typhoidal Salmonella serotypes. Long-term carriage of non-typhoidal Salmonella serotypes has not been described. Even though symptoms usually last only a few days, infected adults can shed Salmonella in their feces for one month on average after initial infections; children under the age of 5 years can shed bacteria in their feces for an average of 7 weeks.4

The most common risk factors for developing salmonellosis include corticosteroid use, malignancy, diabetes, human immunodeficiency virus (HIV) infection, prior use of antimicrobial agents, and other immunosuppressive drugs.4 Anatomical disruptions, including kidney stones, other urinary tract abnormalities, gallstones, atherosclerotic endovascular lesions, and prosthetic devices, may all serve as foci for persistent Salmonella infection.1 In our patient, the only identifiable risk factor was his poorly controlled diabetes mellitus. The HIV status of this patient could not be determined as he declined testing. The source for this patient’s isolated inguinal lymphadenitis is unclear given negative bacteremia and lack of GI symptoms. We postulated that he may have developed transient asymptomatic intestinal non-typhoidal salmonellosis.

Tetracyclines generally do not have good activity against Salmonella. Antibiotics with good Salmonella coverage include fluoroquinolones, TMP-SMZ, ampicillin, or a third-generation cephalosporin.2 Because of the increasing resistance to TMP-SMZ and ampicillin, third-generation cephalosporins or quinolones are reasonable alternatives if susceptibilities are not yet available.2 A minimum of 2 weeks of antimicrobial therapy is suggested for the treatment of a surgically eradicated soft-tissue focus in a normal patient.1

Untreated Salmonella bacteremia in adults can lead to the development of infectious endarteritis, especially involving the abdominal aorta.9 A case study by Cohen et al in 1978 found that 25% of bacteremic adults over 50 years of age, identified by positive results of blood cultures, developed arteritis or endocarditis.9 For patients with painful focal lymphadenitis caused by gram-negative motile bacilli with a history of STIs, the differential diagnosis includes glandular tularemia, chancroid, and lymphogranuloma venereum. Although Salmonella is not a common cause, given the possible serious systemic complications from typhoidal and non-typhoidal Salmonella, clinicians may need to consider salmonellosis in their differential diagnoses and antimicrobial coverage.