Significance of platelet counts in health and disease: Insights from a population study using data from the National Health and Nutrition Examination Survey

Background: Platelets are important mediators of coagulation, inflammation, and atherosclerosis. We conducted a large population study with National Health and Nutrition Examination Survey (NHANES) data to understand the relationship of total platelet count (TPC) with health and disease in humans.

Methods: NHANES is a cross-sectional survey of non-institutionalized United States adults, administered every 2 years by the Centers for Disease Control and Prevention. Participants answer a questionnaire, receive a physical examination, and undergo laboratory tests. TPC values were analyzed for a six-year period of NHANES (2011–2016). Weighted 10th and 90th percentiles were calculated, and logistic regression was used to predict likelihood (Odds ratio [OR]) of being in categories with TPC < 10th percentile or > 90th percentile. Statistical analysis was performed using Stata/SE 15.1, using population weights for complex survey design.

Platelets have a critical role in hemostasis, coagulation, and thrombosis. They also appear to have an important role in immunity, inflammation, and atherosclerosis.1 The Total Platelet Count (TPC) not only varies by age, sex, and ethnicity but also has high heritability; some studies have suggested that it is predominantly genetically determined.2 The platelet count is routinely used to analyze bone marrow function, classify patients with blood loss, and identify syndromes characterized by thrombocytopenia and thrombocytosis. However, in the last decade, there has been an increasing interest in demonstrating links between platelet counts and several health and disease states and using platelet counts as a predictor of outcomes. Studies have shown that the TPC can be used in varied clinical scenarios ranging from a prognostic indicator in early detection of post burn septicemia to a predictor of venous thromboembolism in cancer patients treated with chemotherapy.3,4 A recent study suggested that changes in TPC during hospitalization can be used as a predictor for survival among patients with community-acquired pneumonia.5

The total platelet count is a routine laboratory test reported as part of a complete blood count both in outpatient and inpatient healthcare settings. Although there are varying reports regarding the true normal range of the TPC in healthy individuals, understanding its association with different diseases might help us use it as a potential clinical tool in our practice. In this study, we analyzed information from a large number of adults using 2011–2016 National Health and Nutrition Examination Survey (NHANES) data to identify and characterize the relationship of TPC with health and disease.

NHANES is a nationally representative cross-sectional survey of the non-institutionalized U.S. population, administered every two years by the Centers for Disease Control and Prevention. Participants answer a demographic and health questionnaire, receive a physical examination, and undergo laboratory tests.6 Total platelet count is measured as a part of a complete blood count (CBC) with the UniCel DxH 800 Analyzer (Coulter) using the EDTA-mixed blood sample from the participants.7 Six years of NHANES data (2011–2016) were aggregated to create a large analysis sample for descriptive comparisons. Statistical analysis was performed using the Stata/SE 15.1, with population weighting to account for the complex survey design of NHANES (StataCorp LP, College Station, TX, USA) software.

The laboratory manual provides the reference ranges on CBC parameters (including TPC) in the form of lower (2.5th percentile) and upper (97.5th percentile) limits, based on the age and gender of the survey respondents.7 For our analysis we used weighted 10th and 90th percentiles limits to create binary variables indicating lower and upper thresholds. Logistic regression models predicted the likelihood of a group member being below the 10th percentile or above the 90th percentile for the TPC, respectively. These thresholds describe groups more likely to fall at the outer edges of the distribution and are not intended as clinical thresholds for TPC. Comorbidities in NHANES are identified from self-reported doctor diagnoses (SRDD), based on whether the participants’ doctors had ever told them that they had a particular diagnosis. This study explores a number of common comorbidities, including asthma, emphysema, chronic obstructive pulmonary disease (COPD), congestive heart failure (CHF), coronary heart disease (CHD), and cancer. Additional covariates included race/ethnicity, age, gender, insurance status, body mass index (BMI) category, and hospitalization for a night in the past 12 months.

From a total of 17,969 adult NHANES participants, the mean TPC was 236 × 103/µL. The standard deviation was 59 × 103/µL, with a wide range of TPC from 170 × 103/µL (10th percentile) to 311 × 103/µL (90th percentile). Figure 1 shows the distribution of TPC in the full NHANES adult sample. The distribution of TPC in relation to the baseline characteristics is summarized in Table 1. The mean TPC in females in our study was higher than in males, 248 × 103/µL and 233 × 103/µL, respectively. In addition, the mean TPC gradually decreases as age increases. The mean TPC were in a very similar range among different ethnicities with no significant differences; the Hispanic population had the highest mean TPC in our study. 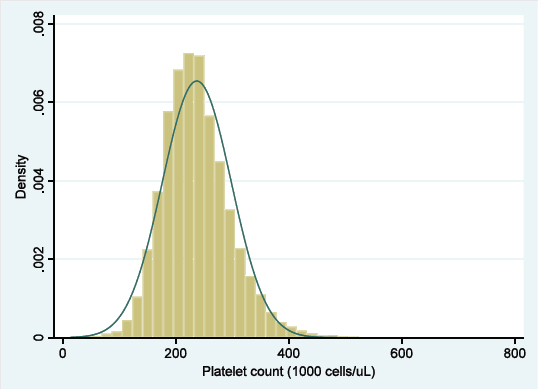 Table 1. Distribution of total platelet count in the study population with baseline characteristic

In our study, we found similar results for the mean TPC reported in other studies. Female participants had higher mean TPC than male participants, which might be explained by the influence of estrogen which increases platelet formation from megakaryocytes. In addition, more adipose tissue in some females could promote platelet development.8,9 Segal et al reported that females usually have TPC approximately 20 × 103/µL higher than males.9 Genetic variation could also potentially contribute to hormone mediated differences in the platelet count between gender.10 Older age groups tend to have a lower TPC than younger age groups possibly due to age-related reduction of hematopoietic stem cell reserve or bone marrow dysfunction.9,11 Studies looking at differences in platelet counts among races have produced variable results. Platelet count differences among subpopulations and races suggest that genetic polymorphisms in regulatory proteins influence platelet production.9,10 Most studies have shown that African populations usually have a lower platelet count than Caucasian populations,9 which was consistent with our finding that non-Hispanic black populations had higher odds of having TPC < 10th percentile.

Our study from a large adult population demonstrated that a few health and disease conditions were significantly associated with low or high ranges of the TPC. Even though determination of the exact cause-effect relationship is difficult, the observed variations in the TPC could be explained by alteration of the formation or destruction of platelets in different physiological conditions, such as aging, physiologic stress, hormonal changes, and pathological conditions, such as chronic inflammation, infection, myeloproliferative disorders, and neoplasm.1

After adjustment for confounding factors, a low platelet count had a significant association with coronary artery disease in our study. Recent research using data from the Framingham study found an association between low platelet counts and all cardiovascular diseases.8 Both low and high TPC were found to be positively associated with CHD mortality and non-CHD/non-cancer mortalities.14,15 Mean platelet volume has been used to determine platelet activity and is a strong independent predictor of outcome in patients with acute myocardial infarction.16–19 It is possible that aspirin, which is frequently used in CHD patients, may have some role in this association. In a previous randomized study involving healthy volunteers, platelet count and total platelet mass increased over seven days in middle-aged men who were taking aspirin.20 However, our recently published data on the NHANES population did not reveal any significant association between mean platelet volume and CHD and CHF.21

The association of high platelet counts and obesity has been reported in several studies.8,16,22,23 Obesity is considered a chronic inflammatory condition, and it is a significant risk factor for cardiovascular disease and hypercoagulability. Interleukin 6 produced from adipose tissue has an important role in the pathogenesis of atherothrombosis. Interleukin-6 and other cytokines influence the proliferation of megakaryocyte progenitors and act synergistically with thrombopoietin and stem cell factor in stimulating megakaryocytopoiesis. A cross-sectional study done on six thousand adults reported the associations of elevated platelet count with all degrees of obesity in female participants, including overweight, obese, and morbidly obese.23 In a study of postmenopausal women, a significant association between platelet count and sarcopenic obesity persisted even after adjusting for possible confounding factors.22 The relevance of high platelet counts in asthmatics is also supported by our study. A recent study showed that platelets possessing preformed granules with proinflammatory and procoagulant mediators have an important role in the development of allergic inflammation and the recruitment of eosinophils in asthma patients.24 In contrast to our results, COPD has usually been associated with thrombocytosis due to the low grade chronic inflammation associated with it. The study by Aaron et al reported that platelet activation was greater in patients with COPD compared to control patients and that taking aspirin regularly could be associated with more than a 50% reduction in the rate of emphysema progression over 10 years.25 However, the association of COPD exacerbation outcomes with the total platelet count is still controversial.26,27

The strength of our study is a large number of participants, which is representative of every region of the US. Our study limitations include the cross-sectional design in which cause and effect relationships cannot be established and the self-reported data from participants which may lead to selection, misclassification, and recall bias.

Our study demonstrates that low and high total platelet counts have associations with various physiological conditions and disease states. These results are consistent with existing data that indicate that patients who have congestive heart failure or coronary heart disease are more likely to have low platelet counts. Obese individuals and patients with emphysema or asthma have higher odds of having a high platelet count. The exact explanation of these associations is still unclear at this time. Information on the association between routine laboratory values and diseases could lead to studies on the pathogenesis and or treatment. In addition, strong associations with outcome could be incorporated into prediction tools.