The differential diagnosis of cystic lung disease in adults includes inherited genetic syndromes and several acquired conditions. Birt–Hogg–Dubé syndrome (BHD) is a rare inherited cystic lung disease associated with an increased risk of renal cell carcinoma, pulmonary cysts, and spontaneous pneumothorax that is not typically included in the differential diagnosis. Early recognition of this potentially life threatening syndrome is important and may help prevent complications associated with this disease entity. The presence of spontaneous pneumothorax in this patient population is estimated at 30 %, and 12–34 % of patients with BHD are eventually diagnosed with renal cancer, usually by age 50 years.

We describe a patient referred to the pulmonary service for progressive dyspnea on exertion. Her evaluation revealed fibrofolliculomas on her face and neck, pulmonary cysts on thoracic imaging, and FLCN genetic mutations on chromosome 17 with genetic testing. These results confirmed the diagnosis of Birt–Hogg–Dubé syndrome.

A 60-year-old Caucasian woman with a past medical history of anxiety and hypertension was referred to the pulmonary service with a 24-month history of progressive exertional dyspnea. She was able to perform activities of daily living, could walk daily without significant limitations, but noted dyspnea walking up a flight of stairs or walking briskly. She had never smoked, denied second hand smoke exposure and occupational exposures, and had no history of asthma. 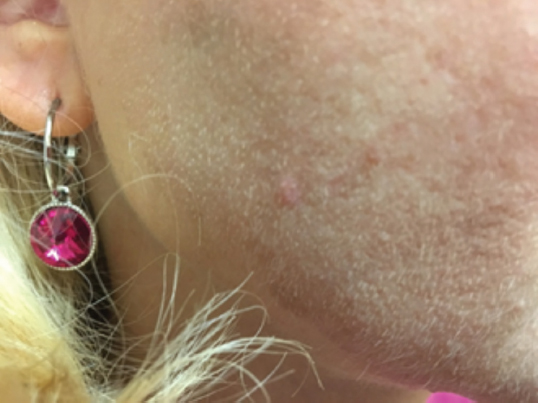 Figure 1. Multiple firm, non-tender, papules over the cheeks and nasolabial folds are seen on physical examination. 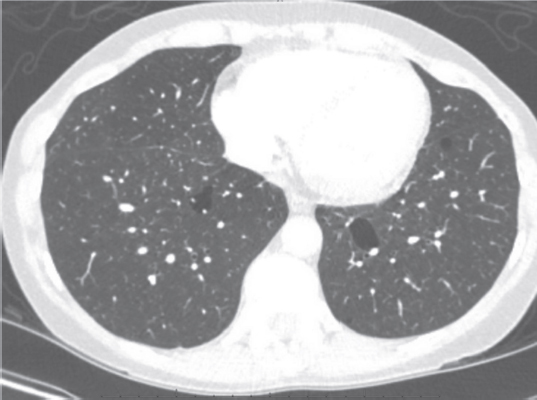 Referral to the dermatology clinic was made to evaluate her skin lesions. Histopathology of the skin lesion revealed proliferation of follicular epithelium surrounded by a perifollicular fibrous sheath that was consistent with a fibrofolliculoma. Epithelial strands were composed of thin cords of epithelial cells and the stroma surrounding the epithelium was densely fibrous and sclerotic (Figure 3, hematoxylin-eosin, original magnification × 200). The patient was then referred to the medical center genetic counselor; she had blood tests that revealed a heterozygous profile for the folliculin gene (FLCN) that confirmed the diagnosis of Birt–Hogg–Dubé syndrome.

Figure 3. Histopathology of the skin lesion reveals proliferation of follicular epithelium surrounded by a perifollicular fibrous sheath consistent with a fibrofolliculoma. The blue arrows point to epithelial cells, and the stroma surrounding the epithelium is densely fibrous and sclerotic (hematoxylin-eosin, original magnification × 200).

Birt–Hogg–Dubé (BHD) syndrome was initially described in 1977 by a dermatologist (Burt), a pathologist (Hogg), and an internist (Dubé). It is a rare autosomal dominant disorder characterized by the development of hair follicle hamartomas (primarily affecting the face, neck, and upper trunk), pulmonary cysts that may give rise to a spontaneous pneumothorax, and renal cell carcinoma. Birt–Hogg–Dubé syndrome is caused by a loss of function mutation in the BHD gene, FLCN located on chromosome 17p11.2. The FLCN gene is thought to encode for folliculin a probable tumor suppressor protein resulting in dysregulation of mTOR signaling. The function of folliculin in maintenance of pulmonary structural integrity is not well established. Cystic lung lesions typically present in the fourth to fifth decade of life, and renal tumors can occur as early as young adulthood. The rate of progression of pulmonary disease in these patients is unknown; BHD does not usually result in respiratory failure.³

The prognosis of BHD depends primarily upon the penetrance of renal cancer and histologic type of renal cancer that develops. Deaths from renal cancer in BHD syndrome are uncommon, and the majority of cancer deaths are secondary to metastatic clear cell carcinoma. Asymptomatic family members should be counseled about the importance of screening and offered genetic testing.5