Before the development of effective therapy for tuberculosis (TB), folk remedies encouraged patients to engage in physical activity and get enough sunlight, and sanatoriums offered isolation of TB patients, good nutrition, and adequate bed rest.1 No scientific proof exists for the effect these approaches had on disease. John Alexander, one of the presidents of the American Association for the Thoracic Surgeon, advocated compression therapy which could be achieved by creating an artificial pneumothorax or by thoracoplasty to repair the diseased lung.2,3 It was postulated that lung collapse would limit the spread of the disease by inducing fibrosis and encapsulating the infected area. By collapsing the treated lung, ventilation to the treated lung was impaired, thereby reducing oxygen levels in the lung tissue and inhibiting the growth of the oxygen-dependent tuberculous bacillus.

Thoracoplasty is a procedure that targets the resolution of a cavity (pleural or pulmonary) by collapsing the chest wall through rib resection. It was a major advance in pulmonary tuberculosis surgery and resulted in sputum negativity in 75% of survivors.4

Friedrich first developed a radical extrapleural thoracoplasty involving resection of 2–9 ribs but sparing the periosteum, intercostal musculature, and nerves. This procedure was unlike the radical intrapleural thoracoplasty developed by Schede in the 1890s that resected the entire chest wall en bloc overlying the empyema cavity. Sauerbruch developed paravertebral thoracoplasty that preferentially resected the posterior portion of the ribs and transverse processes of the thoracic vertebrae. Briefly in thoracoplasty, the ribs overlying the empyema cavity are resected, the cavity is curetted, the bronchial fistula, if present, is closed, and the parietal plane is sutured to the mediastinal plane. 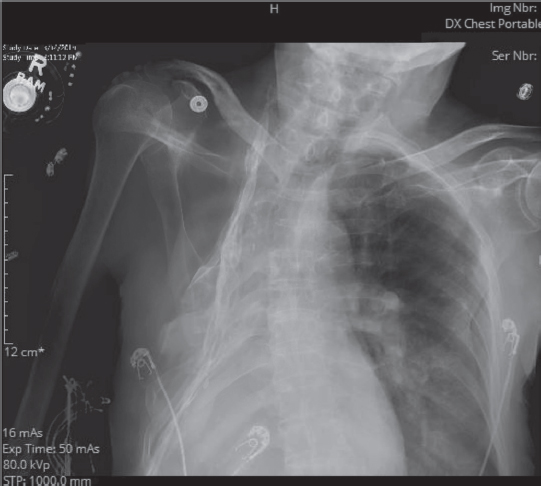 Figure. Plain frontal view chest radiograph that illustrates the results from a thoracoplasty.

The discovery of anti-tuberculosis drugs–starting with streptomycin in 1944 and rifampin in 1946– dramatically changed TB therapy. Thoracoplasty is considered a mutilating operation, leading to undesirable anatomic, functional, and cosmetic sequelae. However, despite its bad reputation, there are a few remaining situations, such as pleural empyema not amenable to decortication, parenchymal disease with limited lung re-expansion, and refractory empyema status post therapeutic pneumonectomy, in which thoracoplasty should be considered. The indications of thoracoplasty for the treatment of pulmonary infections include severe fibrotic changes of residual lung and multidrug resistant infections. Persistent bronchopulmonary fistulae are frequently solved with the use of muscle flaps in combination with thoracoplasty.

Positive outcomes for patients with multidrug resistant tuberculosis and increasing number of resistant cases confirms the relevance of this approach.6–9 Thoracoplasty is usually considered in desperate cases with failed medical treatments and failure of standard procedures of resection or decortications.