A 78-year-old man presented to the emergency department with severe epigastric pain. An electrocardiogram showed ST-segment elevation in leads V2 and V3 consistent with acute myocardial ischemia. He denied any underlying disease. On physical examination, his abdomen had hypoactive bowel sounds, diffuse rebound tenderness, and muscle guarding. An upright abdominal x-ray showed pneumoperitoneum, and emergency laparotomy was done. We present a case of perforated gastric ulcer presenting with ST-segment elevation with documented normal coronary arteries. The ST-segment elevation reverted to normal after the surgery.

Awareness of these pseudo-myocardial infarction cases is important for the clinician to avoid unnecessary thrombolytic treatment or percutaneous intervention and potentially dangerous complications.

A 78-year-old man presented to the emergency department with sudden epigastric pain lasting 3 hours. He has no underlying disease. At the time of presentation his blood pressure was 110/70 mm Hg, his pulse rate was 80 beats per minute, and his body temperature was 37.0 °C. The 12-lead electrocardiography disclosed ST-segment elevation in leads V2 and V3 (Figure 1A), consistent with acute anterior myocardial infarction. Auscultation of the chest and heart showed normal breath sounds and the absence of cardiac murmurs, and there was no jugular venous distension or pitting edema of the legs. However, examination of abdomen disclosed hypoactive bowel sounds, generalized abdominal guarding, and rebound tenderness. Cardiac markers tests revealed a troponin T less than 0.01 ng/ml. The remaining tests, including complete blood count, electrolyte, blood urea nitrogen, and creatinine, were within normal limits. 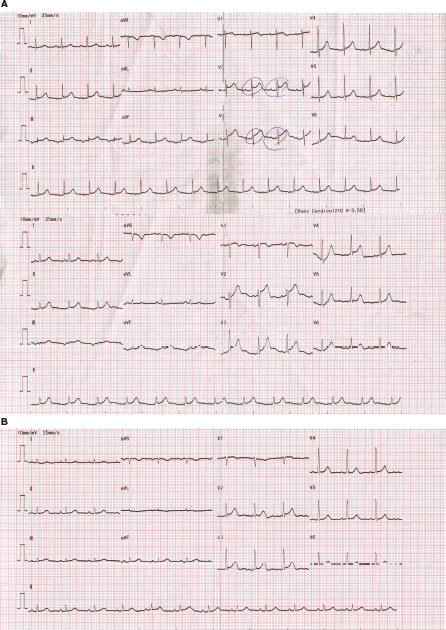 A cardiologist was consulted, and transthoracic echocardiography revealed normal wall motion with an ejection fraction of 74%. No vegetations or valvular disease were noted. An acute abdomen series was performed for suspect acute surgical condition. An upright abdominal x-ray showed free air under both diaphragms (Figure 2). He underwent emergency exploratory laparotomy, and a perforated gastric ulcer 1 cm in diameter was found. Simple suture and placement of abdominal drains were performed. A follow-up 12-lead electrocardiogram performed 24 hours after the operation revealed normalization of ST-segments in leads V2 and V3 (Figure 1B). Coronary computed tomography angiography (CTA) done after the patient was stabilized and revealed no significant stenosis of coronary arteries. Repeat cardiac markers remained normal. There were no complications during the postoperative course, and the patient was discharged seven days later. 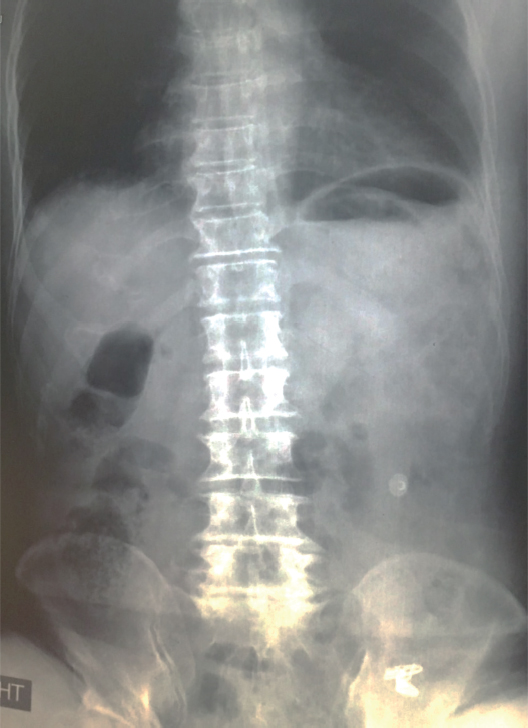 We describe a 78-year-old patient who presented to the emergency department with sudden epigastric pain without a history of underlying diseases. The electrocardiogram revealed acute anterior wall myocardial infarction. Infarction of the anterior wall should cause shock and acute heart failure in patients. Without any sign of shock, jugular venous distension, and reciprocal ECG changes, our case was not consistent with acute myocardial infarction. Moreover, an abnormal abdominal examination, normal cardiac markers level, and normal transthoracic echocardiography prompted us to consider an acute abdomen. Exploratory laparotomy was done, and a perforated gastric ulcer was repaired that led to a normalization of ST-segments.

An acute abdomen is one of the other non-cardiac causes associated with pseudo-myocardial infarction but is rare. There are several reported cases of ST-segment elevation in patient with acute abdominal condition, such as acute cholecystitis,5–8 acute pancreatitis,9,10 acute appendicitis,11,12 and perforated duodenal ulcer.13,14 Several mechanisms have been postulated to explain the electrocardiogram changes associated with acute abdominal conditions, and these include prolonged hypotension leading to decreased coronary blood flow, vagal nerve stimulation, circulating proteolytic enzymes, increased myocardial oxygen consumption, and decreased oxygen delivery to the heart resulting from sepsis.11,12 Although many mechanisms have been postulated, the exact mechanism remains unclear. Since this patient had no history of shock and had a normal coronary CTA, the mechanism of transient ST-segment elevation in this case should be related to a perforated gastric ulcer rather than to acute coronary insufficiency.

In conclusion, perforated gastric ulcer should be recognized as a rare presentation causing ST-segment elevation. It is vital for clinicians to know that acute abdominal conditions are one of the causes of ECG change because a delay in diagnosis may lead to serious complications.