A giant bladder stone is a rare urinary tract stone not commonly seen in clinical practice. It is defined as a stone weighing more than 100 grams and measuring more than 4 cm along its longest dimension.1 We are reporting a case of a giant bladder stone (measuring 8 cm × 6 cm × 6 cm) associated with bilateral hydronephrosis, renal insufficiency, left renal staghorn stone, and septic shock.

A 57-year-old man without significant past medical history was transferred to our hospital and admitted to the MICU with the diagnosis of urosepsis and septic shock. He presented with fever, chills, dysuria, and left flank pain. Upon evaluation, he was pale and acutely ill. His blood pressure was 99/55 mmHg, heart rate 102 beats/minute, and temperature 38 °C. 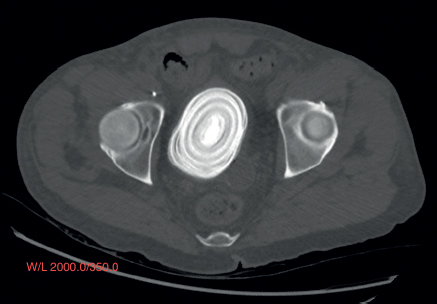 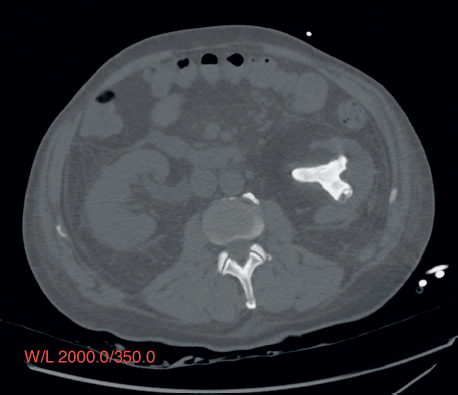 He was started on IV fluids, vasopressors, and broad-spectrum IV antibiotics for septic shock. Bilateral decompressive nephrostomy tubes were placed, and cardiothoracic surgery planned intervention after controlling the sepsis. But the patient remained critically ill and died of uncontrolled sepsis and persistent shock.

Giant bladder stones have virtually disappeared from modern literature due to increased awareness of conditions leading to urinary tract stone formation.1–2 The most common predisposing factor for bladder calculi is usually bladder outlet obstruction, and patients generally present with a history of recurrent UTI, hematuria, or urinary retention. Bladder stones are usually associated with renal or ureteral calculi, and they rarely ever occur without associated upper urinary tract calculi.3–4 Our patient was found to have giant bladder stones in association with left kidney staghorn stones.

Infected stones account for approximately 15% of urinary stone diseases and are thus an important subgroup.5 Our patient belongs to this subgroup; he was admitted with the diagnosis of UTI complicated with septic shock. The basic precondition for the formation of infected stones is a urease-positive urinary tract infection. Urease producing bacteria cause hydrolysis of urea which generates ammonia and carbon dioxide as reaction products. As a result, ammonium ions can form, and at the same time, an alkaline urine develops. Both are preconditions for the formation of struvite and carbonate apatite crystals. When these crystals deposit, infected stones form. Although our patient had a history of UTI and urinary tract stones before, no analysis of the chemical composition of the stones was made.6–7

This report showcases this rare clinical presentation which can develop in the absence of clear predisposing factors related to bladder outlet obstruction and in a region where medical care is readily available. Accurate diagnosis, relief of any urinary obstruction, infection control, and meticulous surgical technique are essential for proper treatment.8