Obstructive sleep apnea/hypopnea syndrome (OSAHS) has important implications in afflicted patients’ overall management from critical care units to outpatient clinics. This clinical review addresses up-to-date recommendations from professional organizations, such as the American Academy of Sleep Medicine, and puts management in context of patients with comorbid neurocognitive disorders (such as vascular or Alzheimer’s dementia). For example, recent studies have found a potential bidirectional relationship between the disease process OSAHS and neurocognitive disorders or other psychiatric disorders found in older people. It is important to consider possible general medical and psychiatric contributors to severity of OSAHS, particularly in geriatric patients.

Obstructive sleep apnea/hypopnea syndrome (OSAHS) is a primary sleep disorder with disordered breathing that has significant ramifications in cardiac, neurologic, and psychiatric disorders. The primary symptoms of OSAHS are nocturnal breathing disturbances (such as snoring or pauses of breathing during sleep) or excessive daytime sleepiness and otherwise unrefreshing sleep.1 The pathophysiology of this disorder explains its impact on a range of body systems, which results from episodes of reduced ventilation for at least 10 seconds and is commonly associated ≥3% drop in oxygen saturation or interrupted sleep.1 The reduced ventilation contributes to a buildup of carbon dioxide (CO2), further complicating ventilatory control during sleep and resulting in central nervous system (CNS) arousal. The CNS arousal can either contribute to nocturnal awakenings or fragmentation of normal sleep stages. The improper ventilation associated with OSAHS also explains its impact upon cardiovascular health by disrupting autonomic fluctuations and hemodynamic changes associated with normal sleep that are typically cardioprotective.2 The range of adverse cardiovascular effects includes hypertension, cardiac arrhythmias, pulmonary hypertension, coronary artery disease, and stroke.1

There is a consensus in the literature that OSAHS is associated with advanced age and to a greater extent in patients with neurocognitive disorders, such as Alzheimer’s dementia. Further discussion of the pathophysiology and importance of addressing OSAHS in patients with neurocognitive disorders specifically is discussed later in this review. Despite the association between OSAHS and dementia disorders, studies regarding the prevalence of OSAHS in patients with dementia are limited. A 1991 study found that 43% of 235 studied individuals ages 65-years-old and older admitted to a skilled nursing facility had an apnea index ≥ 5 and 60% and > 5 respiratory disturbance index.3 In this same sample, 96% of patients able to complete the Mattis Dementia Rating Scale showed some dementia (score < 145). A more recent Italian multi-center study in 2012 found the prevalence of sleep-disordered breathing up to 60% in a population consisting of individuals with mild cognitive impairment and other dementias.4 A more recent metanalysis of 5 cross-sectional studies in 2016 found that there is a 5.05 aggregate odds ratio in 90 patients affected by Alzheimer’s dementia relative to 146 healthy controls.5

Besides OSAHS, other primary sleep disorders that are critical to address include rapid eye movement (REM) sleep disorders, insomnia, and hypersomnia (Table 1).6,8 When managing restless leg syndrome, consideration of a pre-existing major depressive disorder diagnosis may guide therapy to dopamine agonists after a trial of iron replacement therapy.9 It can be important to consider the possibility of insomnia or hypersomnia as a second diagnosis in some patients with OSAHS. An insomnia disorder should be considered when there is significant delay in sleep onset in patients, which would contribute to symptoms found in patients with OSAHS. Excessive daytime sleepiness that is strongly associated with the poor sleep quality resembles hypersomnia clinically but may lack risk factors, such as obesity or symptoms, such as loud snoring or pauses in breathing during sleep seen in OSAHS. Therefore, persistent hypersomnia that is not associated with characteristic sleep changes by polysomnography in a sleep study or otherwise not responsive to CPAP should prompt re-evaluation for a hypersomnolence disorder.8

Table 1. Review of Pertinent Comorbidities or Contributors to Poor Sleep Quality and Relationship with OSAHS

Cognitive behavioral therapy for insomnia (CBT-I) has the strongest evidence for efficacy among other non-pharmacologic interventions for primary insomnia in the general adult population.10 Cognitive behavioral therapy for insomnia involves a multimodal approach that optimizes patients’ attitudes and thoughts regarding sleep and introduces behavioral interventions commonly referred to as “sleep hygiene” (such as sleep restriction, stimulus control). Cognitive behavioral therapy for insomnia also improves CPAP adherence based on a 2019 study which included 145 patients with OSAHS.11 This is promising since CBT-I is a leading nonpharmacologic intervention for patients with insomnia. There are free online CBT-I programs available in smartphone app form, of which CBT-I Coach developed by the Veteran Affairs Health Care System was found to be superior in usability and implementation of CBT-I among 12 other insomnia therapy smartphone apps.12

When considering pharmacologic agents for a condition, such as primary insomnia, trazodone is generally tolerated well in patients with neurodegenerative disorders, such as Alzheimer’s dementia, and did not increase hypoxemia in a small 2015 study of 15 patients with OSAHS.13 The use of benzodiazepines and other sedatives in patients with neurocognitive disorders is strongly discouraged due to the increased risk of causing more cognitive impairment and an increased risk of delirium.14 Overall the evidence supporting pharmacotherapies is limited in patients affected by neurocognitive disorders secondary to Alzheimer’s dementia and was reviewed in a recent Cochrane review of pharmacotherapies for sleep disturbances in Alzheimer’s disease.15 Only melatonin, trazodone, and ramelteon met inclusion criteria in this review. Melatonin and ramelteon did not have significant benefit in patients with Alzheimer’s disease. Only trazodone at 50 mg showed definite benefit, but larger studies are needed to thoroughly evaluate risks and benefits in these patients. The tricyclic antidepressant, doxepin, is the only drug in its class at low doses (≤6 mg/day) which has a safety profile comparable to placebo.14 Other tricyclic antidepressants are considered a safety concern in these patients for treatment of insomnia, due to being highly anticholinergic and causing orthostatic hypotension. Mirtazapine is an antidepressant that is well tolerated in older patients with depression complicated by insomnia and weight loss; however, studies are limited on its possible benefits for insomnia in patients with Alzheimer’s dementia.

Suvorexant is an orexin receptor antagonist that has demonstrated efficacy in treating insomnia in adults, including those of older age.16,17 A recent study using polysomnography assessment of suvorexant in patients with probable Alzheimer’s disease and comorbid insomnia found improvements in mean total sleep time of 28 minutes, which exceeds the American Academy of Sleep Medicine’s recommendation of 20 minutes for clinically significant differences in comparison to placebo.18 With more studies in patients with neurocognitive disorders, pharmacologic agents with more evidence for benefit in insomnia may be identified. 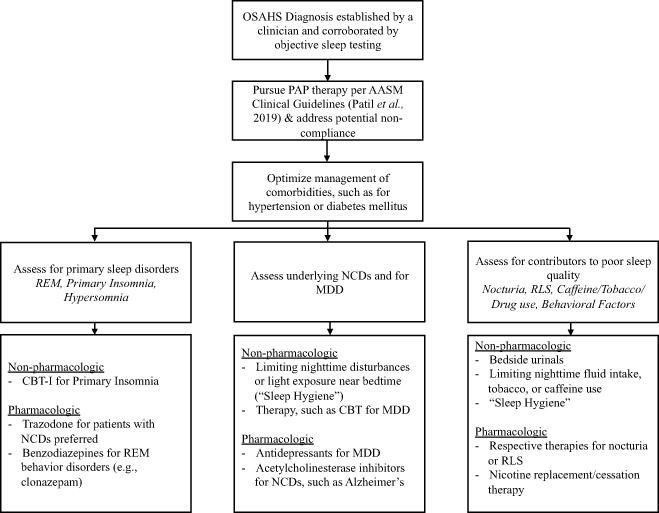 Figure 1. Algorithm integrating management of contributors to reduced sleep quality characteristic of OSAHS. Adapted and modified from SP Patil, et al. (2019), the Clinical Practice Guideline from the AASM. * = Benzodiazepines should be avoided or used in caution in patients with NCDs.

A consensus of literature links OSAHS and multiple types of psychiatric disorders, which range from neurocognitive disorders (NCD) to mood disorders.19,20 Besides the direct effect of excessive daytime sleepiness upon cognitive functioning, the abnormal sleep fragmentation found in OSAHS may have long term effects upon neurocognitive functioning by dysregulating cerebral microvascular and neurovascular systems by hypoperfusion, endothelial dysfunction, and neuroinflammation.21 Dysregulation of cerebral vascular systems is associated with neurovascular comorbidities, such as cerebrovascular accidents (CVA), that directly contribute to the stepwise progression of major or minor vascular NCD.22 Notably, the severity of OSAHS symptoms has been reported to be an independent risk factor for cerebral white matter changes identified by brain magnetic resonance imaging that are typically prodromal of vascular NCD.23 The effects of OSAHS is not isolated to major or minor vascular NCD. There are also demonstrated associations with NCD due to Alzheimer’s disease. A significant study, which was a secondary analysis of the Alzheimer’s Disease Neuroimaging Initiative cohort, was published in 2015 and demonstrated that OSAHS was associated with an earlier onset of cognitive decline.24 Further, the study’s findings of patients that were on continuous positive airway pressure (CPAP) suggested that CPAP treatment of OSAHS may delay progression of cognitive impairment. A recent review in the Journal of Alzheimer’s Disease (2019) discussed mechanisms which included basic science evidence that OSAHS may potentiate neuropathological mechanisms that increase severity of Alzheimer’s dementia (e.g., through the chronic effects of the disruption of sleep architecture and neuroinflammatory processes).25

A complete history is necessary for the assessment of sleep and circadian disturbances in any population, including those affected by dementia. Given that some demented patients may not recall symptoms accurately, a collateral history of symptoms suggestive of primary sleep disorders from caregivers is essential.6 Similarly, there are barriers to CPAP compliance in patients with neurocognitive disorders such as dementias. Barriers may be addressed by educating caregivers on the proper use. In a study that analyzed CPAP compliance in 30 patients with Alzheimer’s dementia randomized to sham and CPAP, patients with Alzheimer’s dementia wore CPAP for an average of 4.8 hours per night at home.26 Notably, the severity of dementia symptoms was not correlated with CPAP compliance.

The associated sleep disturbances and decreased energy in OSAHS can contribute to major depressive disorder, and multiple studies have demonstrated this objectively as recently reviewed by Kerner and Roose (2016) in the American Journal of Geriatric Psychiatry.21 The literature collectively suggests a bidirectional interaction between management of major depressive disorder and OSAHS in geriatric patients. For example, treatment of depression with antidepressants in patients with comorbid OSAHS resulted in improvement in cerebrovascular reactivity by neuroimaging, which is indirectly associated with improvement of OSAHS symptoms.27 Compliance with CPAP alone in patients with comorbid OSAHS has been found to significantly improve depressive symptoms in several studies by patient rated depression scales.28–31 A 2008 case report exemplified the importance of assessing for comorbid sleep disorders as contributors to the symptoms associated with depression, such as suicidal ideation. This patient had a rapid resolution suicidal ideation in the setting of obstructive sleep apnea with initiation of CPAP even without the administration of an antidepressant medication.32

Other comorbidities or contributors to reduced sleep quality

There are other comorbidities in these patients that contribute to poor outcomes or sleep disturbances (Table 1).6,33 This includes addressing comorbidities or concomitant factors, as reviewed elsewhere, such as hypertension,34 dyslipidemia,35 diabetes mellitus,36 inadequate pain management, nocturia,37 restless leg syndrome,9,38 use of substances that interact with sleep (e.g., tobacco, alcohol, caffeine), and light or noise exposure in the evening. Symptoms, such as nocturia, can be addressed without medication by limiting of nighttime fluid intake and daily caffeine intake and using bedside urinals.37 However, the diagnosis and treatment of the underlying condition (such as benign prostatic hyperplasia or overactive bladder) may be necessary.37

It is important to address previously diagnosed or suspected OSAHS in patients in clinical settings that range from critical care units to outpatient clinics. While a recent study has found that OSAHS may not be an independent risk factor for the incidence of post-operative/critical care delirium, the current consensus of the literature suggests that both the mechanisms and severity of OSAHS are associated with prolonged duration of delirium in the critical care setting. For outpatient management, OSAHS is a definite contributor to increased mortality through its effects on multiple body systems. Considering these findings,39–41 the authors of this review can make some recommendations to consider treatment of psychiatric comorbidities when no improvements are observed within one month of initiating CPAP. In patients with depressive symptoms consisting primarily of fatigue, decreased energy, and concentration in the setting of sleep disturbances, the authors of this review recommend initiating separate treatment for depression by 1 month. The presence of anhedonia or suicidality, even within one month of initiating CPAP, should prompt initiation of treatment for depression or an emergent referral to an inpatient facility, respectively. Persistent neurocognitive deficits either confirmed by neuropsychologic testing or MMSE one month after initiation of CPAP should prompt further evaluation of a separate neurocognitive disorder. Clinicians need to remember the importance of addressing other possible general medical and psychiatric contributors to severity of OSAHS, particularly in geriatric patients.