A 59-year-old woman presents to the emergency room with 2-3 weeks of increasing weakness. She has also noted an occasional melenic stool. Her past history is unremarkable. Her vital signs include a pulse rate of 102 bmp and a systolic blood pressure of 96 mmHg. Her significant labs were: hemoglobin 10 gm/dl, BUN 28 mg/dl, and INR 1,4. How can we assess this patient?

Upper gastrointestinal (GI) bleeding is one of the most common medical problems needing hospital admission. To provide adequate medical care and appropriate medical resource utilization, several clinical and endoscopic scoring systems have been developed, implemented, and internally and externally validated.  The initial evidence suggests that these scoring systems can improve clinical decision-making.

Hospital admissions for GI bleeding in the United States account for up to 10% of all hospitalizations andcost 3,180-8,990 US dollars per admission.1,2 The severity of GI bleeding affects mortality and hospital cost.3 Furthermore, elderly patients will have worse outcomes and higher mortality rates since they often have multiple comorbidities.4 To provide the best medical care and to use resources optimally in some hospital settings, several researchers developed tools for risk stratification by identifying and distinguishing between high-risk patients and low risk patients. The goal is to anticipate the risk of rebleeding within 30 days, hospital mortality, urgent endoscopic treatment, and the need for ICU admission. Also, these tools could provide prognostic information regarding the length of hospital stay.5 The literature suggests that the mortality of patients with non-variceal GI bleeding admitted to a GI service is lower than those admitted to an internal medicine service.6 Therefore, the evaluation of severity of GI bleeding is important to identify who will receive the most benefit from hospitalization for close monitoring and aggressive resuscitation.

Clinical evaluation, including the presence or absence of postural symptoms and the assessment of hemodynamic status by monitoring vital signs, urine output, level of consciousness, and estimated blood loss, is very important when managing patients with upper GI bleeding. In addition, clinical presentation, age, and comorbidities are important factors. As a standard of care for the treatment of GI bleeding, patients with hemodynamic compromise need immediate resuscitation and endoscopy within 24 hours after admission.1

The best-established GI bleeding scoring systems include the Rockall score7 and the Glasgow-Blatchford score (GBS).8 Recently, the AIM65 was also found to be useful.9

Some studies have demonstrated that clinical decisions made by certified emergency physicians are also important and perhaps more useful than using a GI bleeding score tool in triage decisions either to admit the patient or to discharge the patient to outpatient evaluation.10,11 However, there has only been one clinical study in the US regarding the use of a GI bleeding scoring system to triage into an ICU or non-ICU bed.12

This scoring tool may help predict the risk on in-hospital bleeding and/or mortality. At the initial evaluation before endoscopy, patients can be evaluated using the pre-endoscopic Rockall score.  Patients are assigned point values for each of the clinical variables (age, shock, and comorbidity) and endoscopic variables (diagnosis and stigmata of recent hemorrhage). The Rockall score is equal to the sum of the points assigned. Scores can range from 0-7 for the pre-endoscopic score and 0-11 points for the complete score. Patients with complete Rockall scores of 2 or less are considered low risk for developing adverse outcomes (rebleeding 4%, mortality <0.1%). Patients with a pre-endoscopic Rockall score of 0 are considered low risk. This scoring system may help anticipate the risk of in-hospital bleeding and mortality.

Patients with upper GI bleeding who have a total GBS of 0 are considered low risk. These patients can be discharged from the emergency room without admission and/or in-hospital intervention. Instead, early out-patient endoscopy would be a more effective option. This scoring system has also been shown to anticipate the risk of intervention (blood transfusion, endoscopic or surgical therapy) and death. Many studies have found it to be a simple and useful scoring system when applied to triage patients in emergency rooms awaiting endoscopic results.13

Patients with upper GI bleeding who have the total AIMS65 of 1 or less are considered at low risk.

Our patient presents with symptomatic anemia, most likely from GI bleeding given the melenic stools. She has a low BP and tachycardia likely secondary to blood loss. Her estimated blood loss would be 15-30% since she is tachycardic but there is no other information regarding orthostasis. She needs immediate fluid resuscitation and hospitalization for evaluation.

Using the upper GI bleeding scoring systems discussed, her calculated pre-endoscopic Rockall score would be 3 from tachycardia (pulse > 100 bpm) and low blood pressure (< 100 mmHg). Her GBS would be 9 from her BUN level, hemoglobin level, heart rate, systolic blood pressure, and presentation of melena. Therefore, this patient would be stratified as high risk by both scoring systems, requiring immediate resuscitation and urgent endoscopic evaluation. 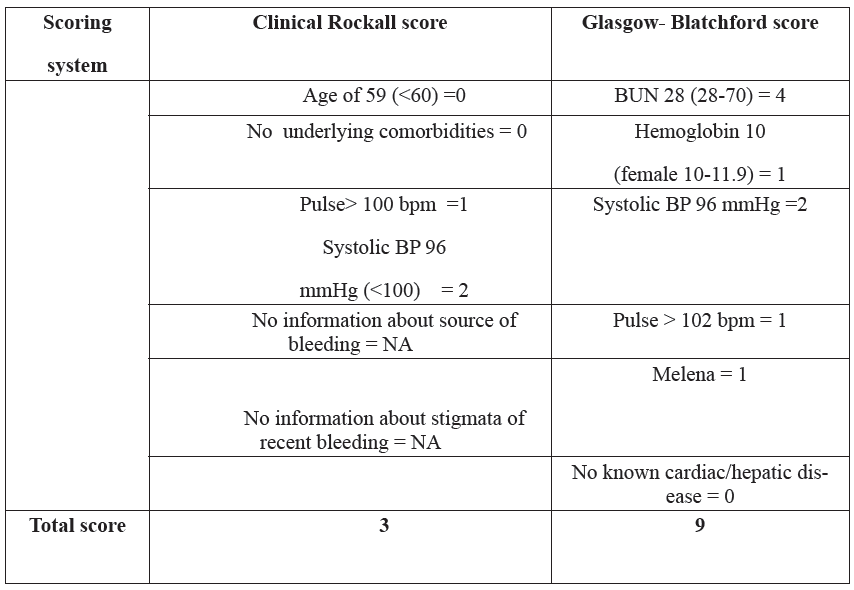