Spontaneous intramural hematoma of the colon is very rare and is typically induced by anticoagulant therapy, a bleeding diathesis, or abdominal trauma. The symptoms are nonspecific and can vary from mild, crampy abdominal pain to hemorrhagic shock. The duodenum and small bowel are the most common sites of intramural gastrointestinal hemorrhage. Spontaneous intramural colonic hematoma is a relatively rare cause, seen in only 1 out of 2500 hospitalized patients with a history of anticoagulant use. We present a rare case of spontaneous colonic intramural hematoma leading to full thickness bowel lumen compromise resulting in bowel obstruction. Additionally, this patient presented with secondary polycythemia due to chronic hypoxemia with no prior history of anticoagulant use before hospital admission and heparin drip use.

Spontaneous intramural hematoma of the colon is a relatively rare cause of small bowel obstruction, with an incidence of 1 in 20,000 admissions, or 1 in 2500 anticoagulated patients per year.1,2 When it occurs, it is often secondary to a history of anticoagulation therapy, especially warfarin use. There are additional, less common, risk factors for bleeding that could lead to intramural hematoma, including several cancers, hemophilia, and vasculitis.3 The clinical presentation is nonspecific, including abdominal pain, and the diagnosis is confirmed by radiographic methods, such as ultrasonography or computed tomography. Conservative treatment involves discontinuation of anticoagulation, but some cases require surgical intervention.

A 41-year-old woman with a history of hypertension and chronic obstructive pulmonary disease (COPD) presented to the emergency department complaining of shortness of breath and cough. Pulmonary examination was positive for crackles and wheezes bilaterally. Her respiratory rate was 22 breaths per minute, and her oxygen saturation was 89%. She was admitted for acute hypoxic respiratory failure secondary to COPD exacerbation. It was noted that the patient had a markedly elevated hemoglobin level of 22.5 gm/dL with a hematocrit of 61%. Results from one year prior reflected a hemoglobin of 12.4 gm/dL. Her polycythemia was attributed to chronic hypoxemia secondary to COPD or obstructive sleep apnea. Therapeutic phlebotomy was initiated. She was placed on deep venous thrombosis prophylaxis with a heparin drip. The significant hypercapnia and hypoxia indicated that the patient was in respiratory failure, and she was intubated, sedated, and transferred to the intensive care unit. As the hemoglobin level decreased with therapeutic phlebotomy, the patient was switched to subcutaneous enoxaparin.

By the second day of hospitalization, her coagulation parameters were significantly elevated, with a prothrombin time of 25.9 seconds (international normalized ratio of 2.61) and partial thromboplastin time of 139 seconds. The patient became increasingly distended over the next few days, and the surgery team was consulted for possible ileus. Her hemoglobin, which was elevated on admission, had decreased substantially. When surgery was consulted, the patient’s hemoglobin had dropped 4 gm/dL over a 24-hour period, and she reported significantly increased abdominal pain. A computed tomography scan without contrast revealed an acute and large retroperitoneal hematoma with intra-abdominal extension (Figure 1). Enoxaparin was held, and the interventional radiology service was consulted for angiography to determine the origin of bleeding and whether any intervention was possible (Figure 2). 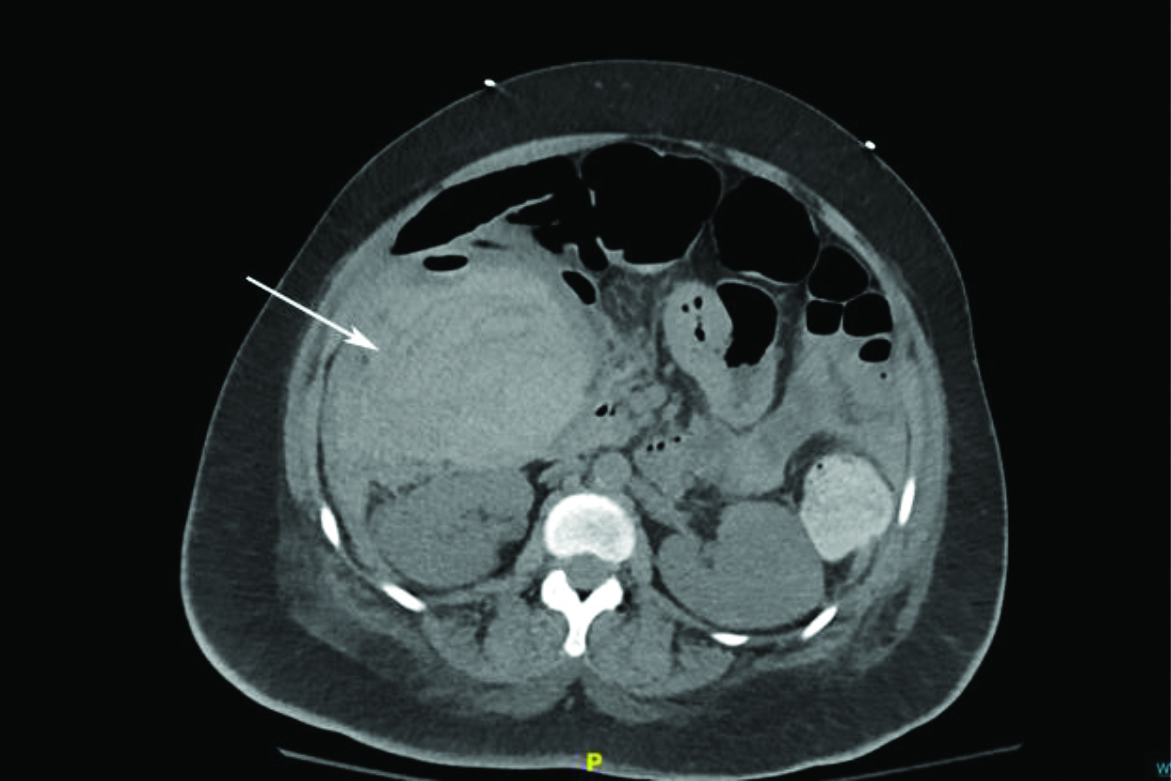 Figure 1. Axial computed tomography scan without contrast of the abdomen. White arrow pointing to a large intramural hematoma in the ascending colon. 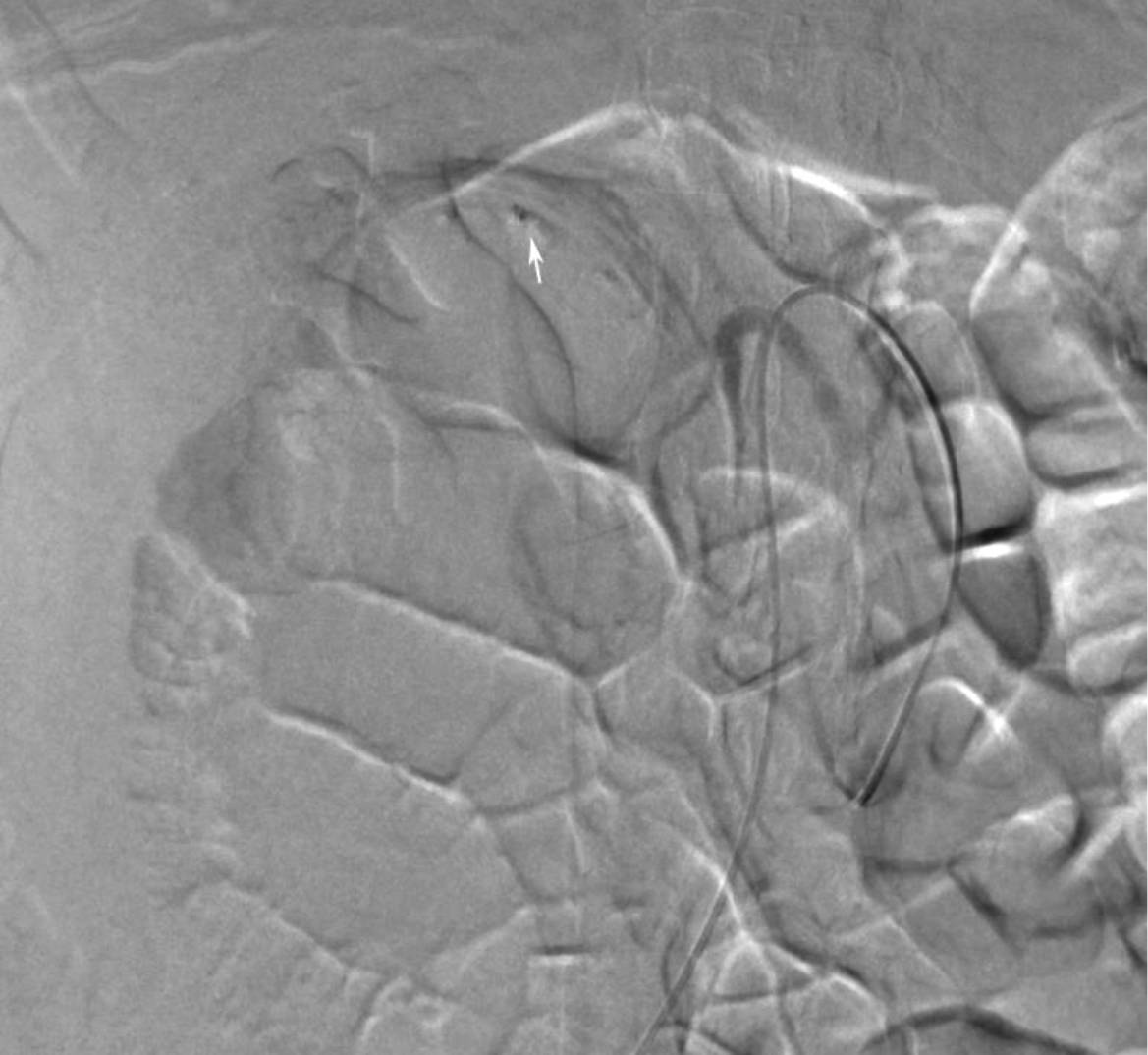 Angiography of the superior mesenteric artery did not detect any active bleeding. A faint blush deriving from a distal branch of the right colic artery was detected on imaging of the right mid-abdomen. Embolization of the branch was performed to decrease bleeding. No bleeding was identified on follow-up imaging in the right colic, middle colic, and ileocolic vessels, or distal superior mesenteric artery. The patient was hemodynamically stable over the next 2 days; however, she continued to have abdominal distention. A CT scan with contrast was ordered and revealed a very large hematoma in the region of the right hemicolon, extending from the hepatic flexure to the cecum (Figure 3). The center of the hematoma appeared to be intramural and appeared to be pushing into the dilated right hemicolon, resulting in obstruction (Figure 4). 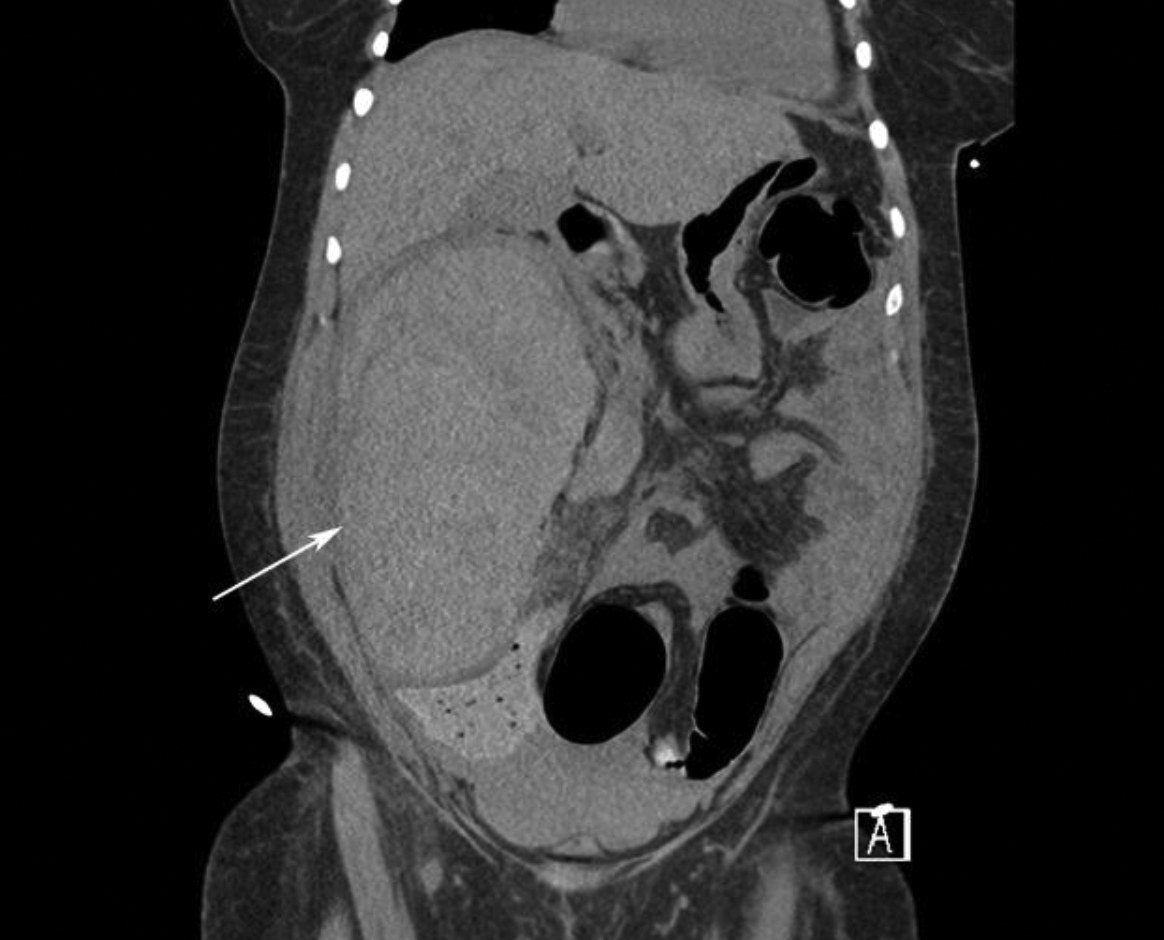 Figure 3. Coronal CT of abdomen and pelvis. White arrow pointing to a large intramural hematoma in the ascending colon. 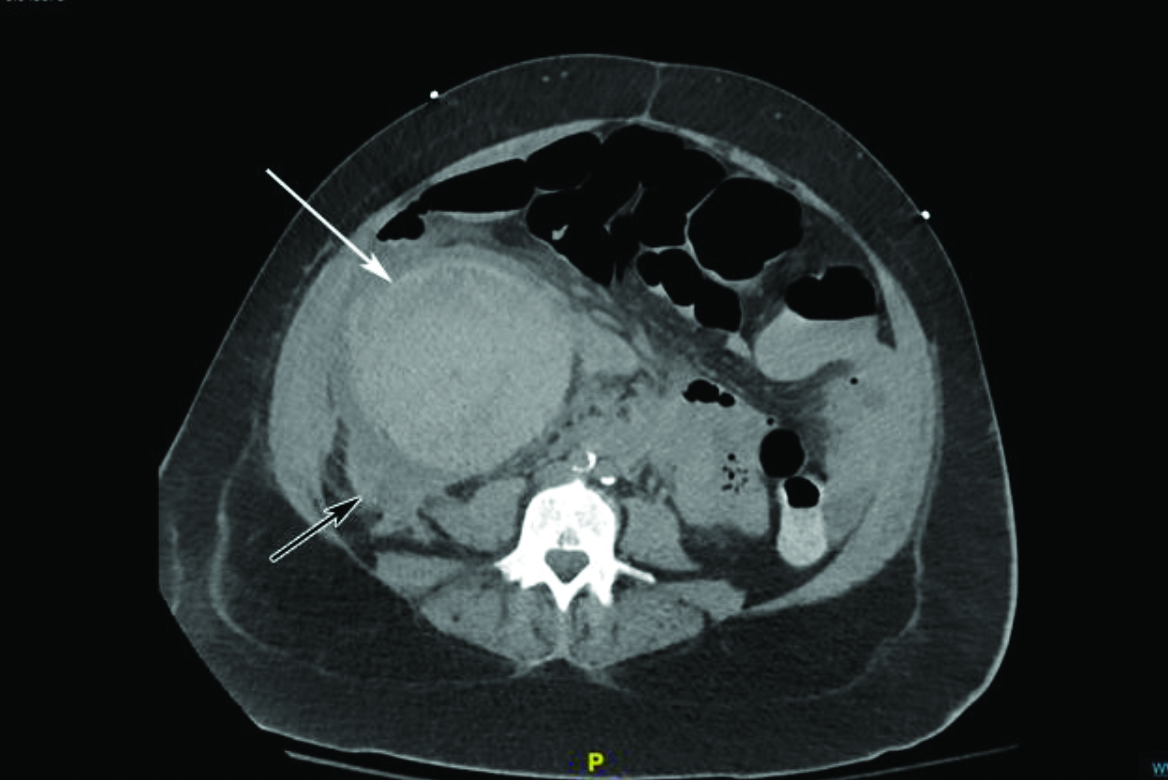 The patient was taken to the operating room for exploratory laparotomy and underwent takedown of the right hepatic flexure, right hemicolectomy with primary ileocolic anastomosis and evacuation of the right retroperitoneal hematoma. After the procedure, the patient’s status steadily improved. She was weaned from mechanical ventilation to a nasal cannula and was able to move out of bed and into a chair. There was a persistent leukocytosis, however, which was revealed to be due to an abscess confirmed by computed tomography scan. The abscess was drained by the interventional radiology service, and a Jackson-Pratt drain was placed. When the drain began to show minimal contents, a follow-up computed tomography scan was ordered, which was normal, and the drain was removed. The patient was discharged from the hospital and scheduled for outpatient follow up.

Spontaneous intramural hematoma of the colon is very rare and is typically induced by anticoagulant therapy, bleeding diathesis, or abdominal trauma.4 These factors can cause bleeding in the form of a singular intramural mass or involve multiple segments. Patients on anticoagulation therapy, especially warfarin, are more susceptible. The symptoms are nonspecific and can vary from mild, crampy abdominal pain to hemorrhagic shock. The physical examination can show rebound tenderness or abdominal guarding. Hematochezia occurs in some cases.4 The duodenum and small bowel are the most common sites of involvement, whereas intramural hematoma of the colon is even more rare.4 The imaging modality of choice is a CT scan.4 Most patients with intramural hematoma of the colon are managed with surgical drainage or resection. Conservative management is possible in patients who are otherwise hemodynamically stable or have contraindications to surgery, such as coagulation disorders.5

Our patient presented with secondary polycythemia and no previous history of warfarin use. Clinical suspicion for intramural hematoma was low based on her risk factors. However, intravenous heparin was used during her hospital stay, and this may have caused her bleeding. This case demonstrates the possibility of bleeding even in patients with no obvious risk factors on admission demonstrates the importance of obtaining frequent coagulation studies in patients throughout the hospital course, especially if on anticoagulation.